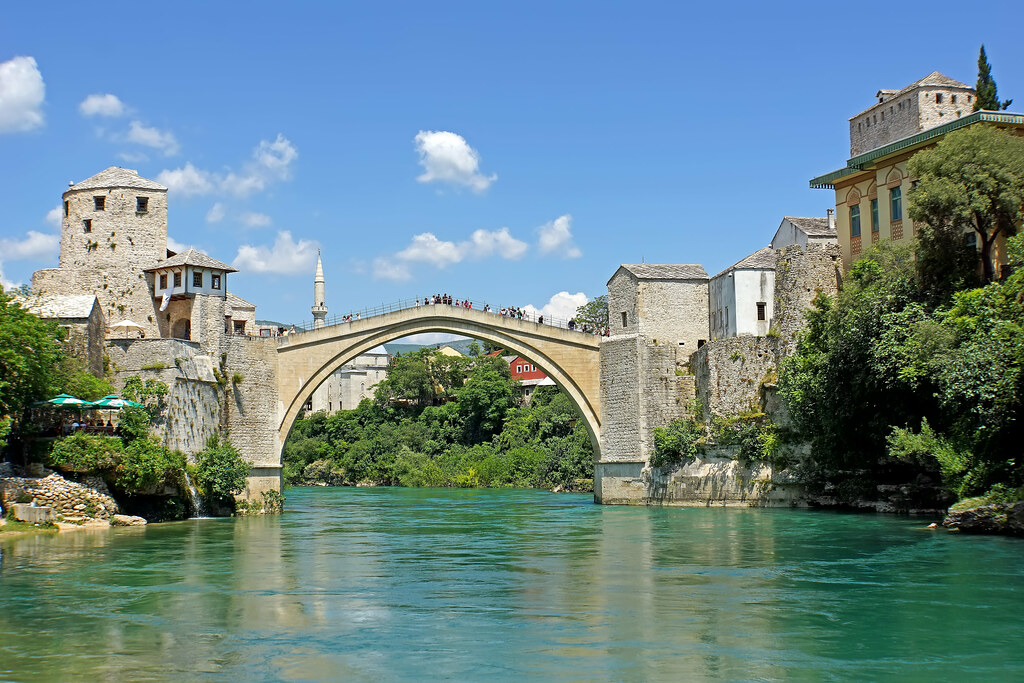 For anyone who lived through the horrors of the war in Bosnia and Herzegovina (BIH) in the 1990s, the Russian aggression in Ukraine feels eerily familiar.  The sight of Mariupol being reduced to rubble by the invading army, Kharkiv being pounded by rockets and shells, the wanton execution of civilians in Bucha and other towns around Kyiv, the stream of refugees and IDPs that have been victimized, the historical arguments leveled by Moscow to justify the reconquest – the parallels are a legion.  And they do awake anxiety and fears of conflict making a comeback to the Balkans, with Bosnia again at its epicenter.

Anxiety is permeating political rhetoric. Addressing the European Parliament’s Foreign Affairs Committee (AFET) on 15 March, Sefik Dzaferovic, the Bosniak member of the country’s tripartite presidency, warned of real risks facing the country. “BiH has condemned Russia’s aggression against Ukraine and we are aware of Russia’s influence in BiH and the Western Balkans.” The same argument is being made by some analysts too.  “Putin won’t stop in Ukraine” is the common adage.

Bosnia is certainly facing major challenges, leaping from one crisis to the next over the past few years.  Republika Srpska (RS), the Serb-majority entity which covers 49% of the state’s territory, is for all intents and purposes acting as an independent polity.  At the end of 2021, its leader Milorad Dodik – formally the Serb member of the Bosnian presidency – threatened to withdraw RS from the indirect tax administration, the armed forces, and the state-level judiciary.  If Dodik makes this step, he would effectively put an end to Bosnia as a loose federation which was established by the 1995 Dayton Peace Accord.  However, that is only part of the problem.  Dragan Covic, leader of the main Croat party in the country, HDZ, is pressing for a revision of electoral legislation.  His main concern is that the Croat member of the presidency could be elected by non-Croat voters in the so-called Federation of Bosnia and Herzegovina (FBiH), the other entity in the common state besides RS. In the worst case, general elections due in October could be postponed, which would plunge Bosnia into an institutional crisis.

Given the precariousness of the situation, it is not difficult for Russia to play the spoiler, as it generally does in the Balkans.  Dodik has long enjoyed diplomatic support from Moscow. Russia has a permanent seat in the UN Security Council but, more importantly, in the Peace Implementation Council (PIC), which oversees Dayton.  While it is debatable whether and under what conditions the Russians may give their blessing to Dodik to announce full secession, there is no doubt they are prepared to do everything short of that in order to back him. For instance,  Russia helped RS rearm its police force, creating a paramilitary structure in parallel to the regular Bosnian army.  Nationalist groups backed by the Kremlin are a regular appearance in Banja Luka, the entity’s capital.   In addition, Russia has cultivated ties to Covic.  Although Croatia is HDZ’s principal backer, the party cooperates with Dodik and, on an ad hoc basis, with the Russian embassy in Sarajevo.

Russia has other channels of influence too.  The media certainly plays a huge role. The pro-Kremlin line promoted by the main outlets in RS but also in next-door Serbia with TV channels and tabloids followed by Bosnian Serbs, not to mention the Serbian version of the Sputnik news agency and the associated radio station.

Last but not least, Russian rhetoric has toughened.  In mid-March, Ambassador Igor Kalabukhov told FTV, a local channel, that Bosnia could well choose to join NATO – as neighboring Montenegro, as well as North Macedonia, did in past years – but that Russia would react accordingly.  Local commentators took that as a veiled threat that Moscow was prepared to wreak havoc, much like in Ukraine.

Against this backdrop, it is easy to grasp why the collective West is under pressure to up its game in Bosnia.  Shortly after the war in Ukraine began, the EU dispatched 500 extra personnel to its peacekeeping mission, EUFOR.  The whole deployment presently numbers 1100 troops, but there are 2500 additional soldiers in reserve.  On 15 March, peacekeepers drove through Banja Luka, delivering a clear message to the RS leadership. EUFOR is also stationed along Bosnia’s border with Serbia, a region that is within RS jurisdiction. Importantly, EUFOR is backed by NATO under the so-called Berlin Plus arrangement. That is an additional deterrent to any would-be troublemaker.

Dodik’s rhetoric appears to have mellowed too. At the European Parliament, he assured MEPs he did not pursue secession but “a sovereign Bosnia.”  That might be Russia’s interest too.  So long as Dodik sits in Sarajevo’s institutions, he would be blocking both Bosnia’s adherence to the Western sanctions and any move towards NATO.  At the same time, Dodik is continuing to play the nationalist card.  On 3 April, he cast a vote in Serbia’s election – underscoring the fact that many Bosnian Serbs hold dual nationality.

Tensions in Bosnia have implications for Turkey, which has historic links to the Bosniak community, has membership in the Peace Implementation Council, and remains a chief contributor to EUFOR along with Austria and Hungary (speaking of imperial legacies!).  Ankara portrays itself as a self-standing player, acting autonomously from the West.  Erdogan enjoys strong personal ties to leaders such as Bakir Izetbegovic, leader of the Party of Democratic Action (SDA) established by his father, Alija Izetbegovic.  He has acted as a mediator between the Bosniak establishment and President Aleksandar Vucic of Serbia, another friend of the Turkish president, in the case of a projected highway to link Belgrade and Sarajevo. If the situation deteriorates, Erdogan might become involved as a go-between too.

Behind the scenes, Turkey will probably redouble efforts to advance Bosnia’s integration into NATO.  Though Erdogan often likes to bash the West, as he did at the massive pre-election rally he staged in Sarajevo back in May 2018, Turkish policy continues to favor the Atlantic Alliance’s expansion in the Western Balkans.  The war in Ukraine underscores the benefits of the security provided by the West and that is a lesson which is not lost to policymakers in Ankara.