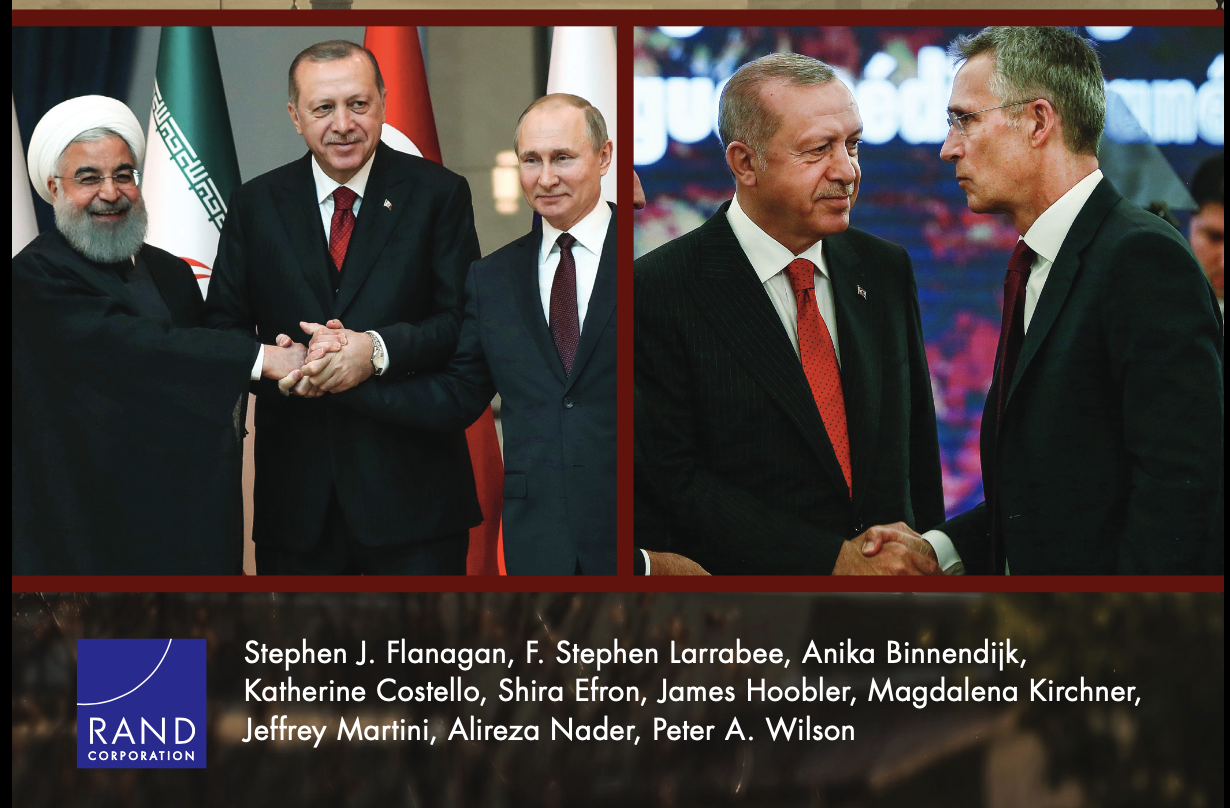 In January 2020, the American think tank organization, RAND Corporation, released a comprehensive report on Turkey. The report sparked a massive public debate in the country after it suggested that a new military coup was imminent and that Turkey’s defense minister Hulusi Akar was extremely close to the US.

Sponsored by the Office of the Deputy Chief of Staff, G-3/5/7, U.S. Army, the report was a part of a project titled “Turkey’s Volatile Dynamics: Implications for the U.S.-Turkish Strategic Partnership and the U.S. Army.” The purpose of the project was to analyze trends in Turkish internal, foreign, and defense policies and assess their implications for U.S. defense strategy and force planning.

As its title implies, “Turkey’s Nationalist Course” underlined the “deep public suspicion towards the United States and Europe” citing that “Erdoğan, with the urgings of his MHP (Nationalist Action Party) partners, is likely to pursue assertive foreign and defense policies that are contrary to the interests of the United States and other NATO allies.”

Throughout its nine chapters in 279 pages, the report addressed and elaborated on various Turkey-related topics. However, Turkish media neglected almost all other issues in the report and focused on one particular page —p.29 of the report.

On that page were two key arguments. The first astonishing claim was that “Mid-level officers are reported to be extremely frustrated with the military leadership. This discontent might even lead to another coup attempt at some point.” (page 29, para.2). The second key argument was about Defense Minister Hulusi Akar. The report mentioned him as “a key interlocutor for the US” and foresaw that “Akar will continue to be the leading figure in Turkish defense affairs for some time.”

Reduced to these two arguments, the report caused ample controversy in Turkey. The commentariat in regime media slammed the report, claiming it intended to trigger a new and pro-US military coup in the country.

In this and the forthcoming article, I’d like to go back over these two suggestions and the subsequent discussions they sparked in Turkey. The first issue I will attempt to elaborate on is the assertion that the discontent of mid-level officers might lead to another military coup at some point.

The Echoes of the Report

The report had a broad repercussion in the media. Several pro-government columnists have taken the report’s findings seriously and penned articles slamming RAND and implying that a coup might be on its way.

For instance, a columnist from pro-government Daily Sabah wrote that “RAND is no ordinary institution. It works directly for the US Department of Defense. The report reflects the plans and expectations of the Pentagon. Therefore, the issue should be taken seriously. Please don’t look at it as a conspiracy theory. No one should be surprised if a coup attempt resurfaces.”

Another Sabah columnist, Mahmut Ovur, dubbed the RAND Corporation a “coup production center,” claiming that former military officer Metin Gurcan has close ties to and is “a manservant of this American deep state think tank.” Metin Gurcan, according to Ovur, was the person who contributed the most to this report. “In fact, Metin Gürcan is cited 39 times in the RAND Corporation’s Turkey report. In a sense, the report bore the signature of Metin Gurcan.”

Interestingly —or maybe not— Metin Gurcan was arrested and imprisoned almost one year after the publication of this report on charges of military and political espionage.

Following the harsh reaction in Turkish media to the report, Erdoğan, too, delved into the issue without directly addressing the report. He stated that “Speculations about a coup threat are attempts to divert Turkey’s attention away from its main goals.”

Another government-aligned columnist wrote that “It was interesting that Erdoğan did not say ‘there is never such a possibility.’ He did not deny the possibility of coup attempts.”

Dogu Perincek, who labeled the purged Turkish officers as “the American Gladio,”  denied such a possibility due to the fact that “There is no atmosphere for the coup in Turkey right now. The manpower for a coup does not exist. There is no ground for the coup, no force to make such an attempt. Who will stage the coup? The Gladio of the USA within the Turkish military was destroyed, crushed, imprisoned, and buried.”

A response to Perincek’s claims came from a conservative writer for the Yeni Safak newspaper. The author predicted that the imminent coup would be carried out not by pro-NATO officers, as Perincek implied, but by Kemalist and secularist military factions.

Yet, no pro-NATO or Kemalist coup has been staged since then. Does that mean that the RAND Report’s suggestion was groundless? I think, no.

However, I suggest that the level of frustration arising from a lack of professionalism or political engagement by the top brass has never reached and would never reach a point that could encourage mid-level officers to venture into a coup attempt. Instead, maybe, the very fear of expulsion of those mid-level officers from the TAF would be a more compelling ground for those officers to stage a coup.

As a matter of fact, from July 2016 onwards, about 50% of the generals and admirals, 90% of the general staff officers, and around 30% of the officers, most of whom held pro-NATO stances, were expelled from the TAF over their alleged links to the Gulen movement. The regime’s plea was that those officers were followers of US-based cleric Fethullah Gulen and that they infiltrated the military for years.

In this rapid cleansing, Erdoğan had to utilize not only several pro-AKP networks but also the intelligence support by ultra-nationalist/Eurasianist former military officials to draw a map of “who is who?” Consequently, Erdoğan found himself in a compulsory mutualization with his erstwhile foes.

When the purges were almost accomplished in 2020, Erdoğan was eyeball-to-eyeball with Kemalist, ultra-nationalist, and Eurasianist military cadres. Those military cadres panicked: “Are we going to be next?”

It is plausible that this panic might have hauled them to think of taking a precaution through a coup attempt. However, we must keep in mind that Erdoğan had already taken his pre-emptive countermeasures: Coup-proofing strategies.

For nearly two decades, civilian supremacy over the military in Turkey has been scholarly discussed in terms of democratic control of the armed forces. However, the post-2016 reforms depart significantly from this normative approach. Instead, they exhibit the fundamental characteristics of coup-proofing strategies.

Erdoğan and the AKP have systematically strengthened civilian authority over the military by gaining a decisive hand in the promotion and recruitment process, supervising military personnel purges, and fostering legal authority for command and control. These reforms and constitutional changes strengthened presidential and civilian control over the TAF while muddying the chain of command, increasing interservice rivalry, and politicizing the officer corps.

In this respect, just like the Erdoğan regime itself, the post-coup TAF transformed into a coalition of necessities. By their very nature, the nationalists and Kemalists were distrusted by Erdoğan. He was well aware that the recent nationalist allegiance to his regime was only cosmetic and, with the helping hand of Hulusi Akar, he has constantly sought to dismiss them as soon as possible and create a more monolithic army in his own image.

Further, the mid-and lower-level vacancies after the dismissal of the gross amounts of officers following the 2016 coup attempt were replaced by two main factions: Ultra-nationalist/Kemalists and pro-AKP religious cadres deemed credible by Erdoğan’s regime. Consequently, more than 70,000 officers, non-commissioned officers, and sergeants have been recruited after 2016 with political loyalty to the government and Erdoğan being the decisive criteria. That clearly depicts that the lower echelons of the military are currently full of pro-Erdoğan soldiers.

Besides, it must be underlined that there is no such particular group that can be labeled “mid-level officers” as an ideologically homogenous group or as a hardwired professional stratum. Although they might have a strong corporate identity structured around the regime’s official ideology (Kemalism), those officers differed in their personal interpretation of the Erdoğan regime’s policies. Whereas some officers increasingly subscribed to Erdoğan’s nationalist and religious policies and discourse, others remained critical of irritant anti-secular and anti-Kemalist practices, while some others opted for a “wait-and-see” opportunism.

Nevertheless, Erdoğan must have taken the RAND Report seriously: Eight months after the report, he crippled the nationalist and Kemalist wing in the military’s middle echelons in August 2020. Accordingly, more than 600 colonels were forcibly retired following the August 2020 Supreme Military Council meeting. According to Veryansin TV, a media outlet with close connections within the military, almost all of these officers were Kemalists.

With all these efforts, today’s TAF continues to portray patchwork characteristics. In that regard, Perincek is partially correct when he asserts and questions, “There is no manpower to stage a coup. Who will carry out the coup?” The cadres of the TAF are so fragmented that there is currently no single dominant faction within the TAF capable of orchestrating a military coup.

However, the recent evolution of ideological factions within different branches of the TAF requires further investigation by scholars and analysts. There is still much to grasp comprehensive knowledge of the numbers, organization, and postcoup plans of the Kemalist, ultra-nationalist, and Eurasianist networks within the TAF. This will be crucial, especially after the parliamentary and presidential elections planned for June 2023. Not only for Turkey, but also for its Western allies.