Maple InstituteMaple Institute
Facebook
Twitter
HomeForeign PolicyThe demilitarization of the Greek Islands in the Aegean Sea in the... 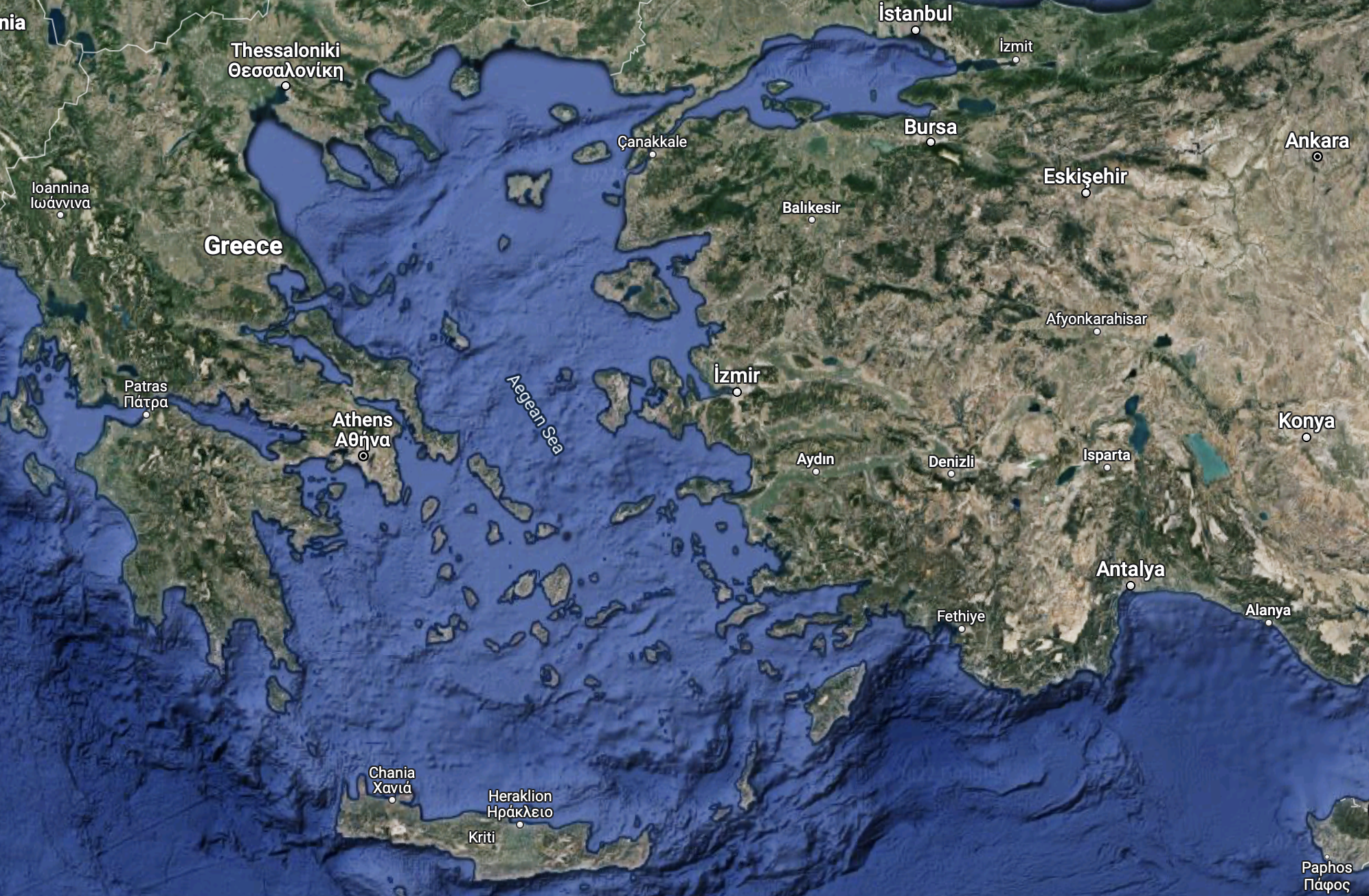 “It is not possible for us to remain silent about the military activities carried out in violation of the agreements on the islands with disarmed status,” the president of Turkey, Erdoğan, told journalists traveling with him from the United Arab Emirates to Turkey on Feb.15, 2022.

He recalled that Ankara had applied to the United Nations to present its rejection against Greek activities on the Aegean islands. “If Greece continues this, of course, we will make this warning at the highest level, whatever is necessary. They may compel us to raise these controversial issues. My minister gave them a low-level warning so that they should not force us to open these issues for discussion,” he said.[1]

Indeed, a few days earlier the Turkish Foreign Minister Mevlut Çavuşoğlu reiterated Turkey’s call on Greece to demilitarize the islands, warning that if Athens does not change its stance, then the debate questioning their sovereignty will begin. “These islands were ceded to Greece by the Treaties of Lausanne of 1923 and Paris of 1947 on the condition of their demilitarization. But Greece has been violating this regime since the 1960s,” he told the TRT television network. “If Greece does not change its position, then the sovereignty of these islands is debatable” he added.[2]

The Foreign Ministry spokesman of Greece A. Papaioannou reacted by stating that “We reject the latest accusations of Turkish officials about the status of the Aegean islands in their entirety. These accusations not only do not comply with basic principles of international law, but they also go beyond simple logic.” The spokesman also said that Athens has sent a letter on this issue to the Secretary-General of the UN.[3]

The official foreign affairs websites of the two countries present their legal arguments on the issue. They disagree on the interpretation of the related international agreements – the Lausanne of 1923, the Montreux of 1936, and the Paris Peace Treaty of 1947. The arguments are complex and lengthy. They have been discussed for decades. For example, the Turkish arguments were posed by Hüseyin Pazarcı in 1986 in a lengthy book and the Greek side answered in 1989 with another book – which included the translation of the Pazarcı’s book – by K.P. Oikonomidis.[4]

Little has been added to the arguments expressed by these studies. Greece claims that there are three categories of islands in dispute: at the North (Lemnos, Samothraki etc), in the ‘middle” (Lesvos, Chios, etc.), and in the South (The Dodecanese). According to Greece, the agreement about the “north” islands was annulled by the Montreux Treaty of 1936 and this treaty was recognized by declarations of Turkish officials (Turkey claims that the declarations did not have legal status).

The Greek claim for the “middle” islands is that the Lausanne Treaty (Article 13) does not mention any specific kind of military installations (radar stations, etc) that are to be prohibited, nor limit the number of soldiers. (The Turkish side evaluates “demilitarization” as covering all kinds of military uses).

As to the South (Dodecanese), Greece claims that Turkey is not part of the 1947 Treaty, and thus has no right to invoke it. A Greek argument that runs for all islands is that Greece is threatened by Turkey (the Fourth army in West Turkey, the big landing fleet opposite the islands, and the “casus belli declaration”) which incurs the right for self-defense.

The complexity of the arguments cannot be analyzed in this article. The Turkish and Greek Foreign Ministries’ views give a fairly good idea of the different approaches on this conflict.[5] Expert analyses of the situation with respect to international law show that the arguments are open to various interpretations.[6]

This frozen conflict on the Aegean islands is basically one that stems from age-old national worries, phobias, and aspirations. The controversy did not appear as legal disagreements on the militarized status of the islands due to coincidental different readings of some treaties but as quasi-historical sovereignty issues. The legal debate followed.

In a Turkish book on the Aegean islands that appeared as early as 1955, and presented as “the first study on the rights of the Turks in the Aegean” (p.14), it is stated that, “Peace in the Middle East and security in Asia may be secured by the return of the Dodecanese islands to Turkey, since Rhodes can be used as a strong military base against Anatolia as explained by many foreign law experts and politicians” (p. 65).[7]

The grief and remorse of “losing the islands” is a frequently met Turkish discourse in different domains. In the textbooks of the 1990s, primary school students read the following: “In the Second World War the whole of Greece was invaded by the Germans. In spite of this defeat the Dodecanese Islands were granted to Greece”. Similarly, “Most of the Aegean Islands were given to Greece by the Great Powers. Whereas in fact these islands are very close to our coasts. Previously the whole Aegean coast, the islands and Greece were under Turkish rule. The islands of the Aegean sea were a part of the Ottoman Empire sixty years ago.”[8]

The grievance of “losing the Greek islands” is encountered in politics, too. There is an old and ongoing quarrel about the “lost opportunity” by the ex-prime minister of Turkey İsmet İnönü in “getting back” the Dodecanese in 1943. The claim is that the Germans had offered the islands and Turkey hesitated to act.[9] However, what alarmed the Greek side was the book titled Strategic Depth by Ahmet Davutoğlu in 2001. This book was translated into Greek and published in 2010. The arguments posed in this study acquired a special significance since Davutoğlu became the Minister of Foreign Affairs in 2009 and Prime Minister in 2014. The book was presented in Greece as a document that shows the Turkish intentions vis-à-vis Greece.

Two of the arguments were of special attention. 1- Turkey was presented as the heir of an empire and its imperial past provides the right, even an “obligation” to have a zone around it, a “hinterland” a “life area” as the book calls it (hayat sahası, hayat alanı in Turkish). This was explained with references to “Lebensraum” (SIC). 2- Turkey should make use of the legal opportunities and the Turkish minorities in the neighboring countries to obtain gains the way it did with Cyprus. These ideas were expressed as follows:

The skirmishes of the Aegean islands after the Ukraine-Russia war

It seems that the controversy over the “islands” is basically an issue related to sovereignty but treated as if it is a security issue. For the Turkish side, it is a “loss that presently causes threats” and for Greece, it is “a threat on its sovereignty rights.” This is a typical trust crisis. The problem can hardly be solved by arguments of international law and references to the articles of the past agreements.

I am writing this article in early March 2022 while the Ukraine-Russia war is actively continuing. The “West” has reacted to the intervention/invasion of Russia and rejected the argument of “national security” that has been put forth by Russia. The unique historical explanations about what Ukraine is and on what happened in the past are considered irrelevant to many. I foresee that Turkey, for a while at least, will not use the argument of “national security” and especially the possible contested “sovereignty” discourse since these arguments will bring to mind Putin’s justifications.

The Prime Minister of Greece repeatedly said that Greece is obliged to militarize the islands for security reasons since Turkey has a big landing fleet opposite the islands, (the Fourth Army in West Turkey), which faces only Greece, and that Turkey threatens Greece with “casus belli”. This phrasing may infer that militarization may be considered unnecessary if these “threats” are called off. If both sides really need to accommodate the present tension this path may prove a productive one to follow.

[5] See:1- Militarization of Eastern Aegean Islands Contrary to the Provisions of International Agreements / Rep. of Turkey Ministry of Foreign Affairs (mfa.gov.tr) and 2- Turkish claims regarding the demilitarization of islands in the Aegean Sea – Relevant Documents (mfa.gr)

Previous article
Why are Former Turkish Generals Backing Russia in the Ukrainian War?
Next article
Can Turkey return to the West once again?