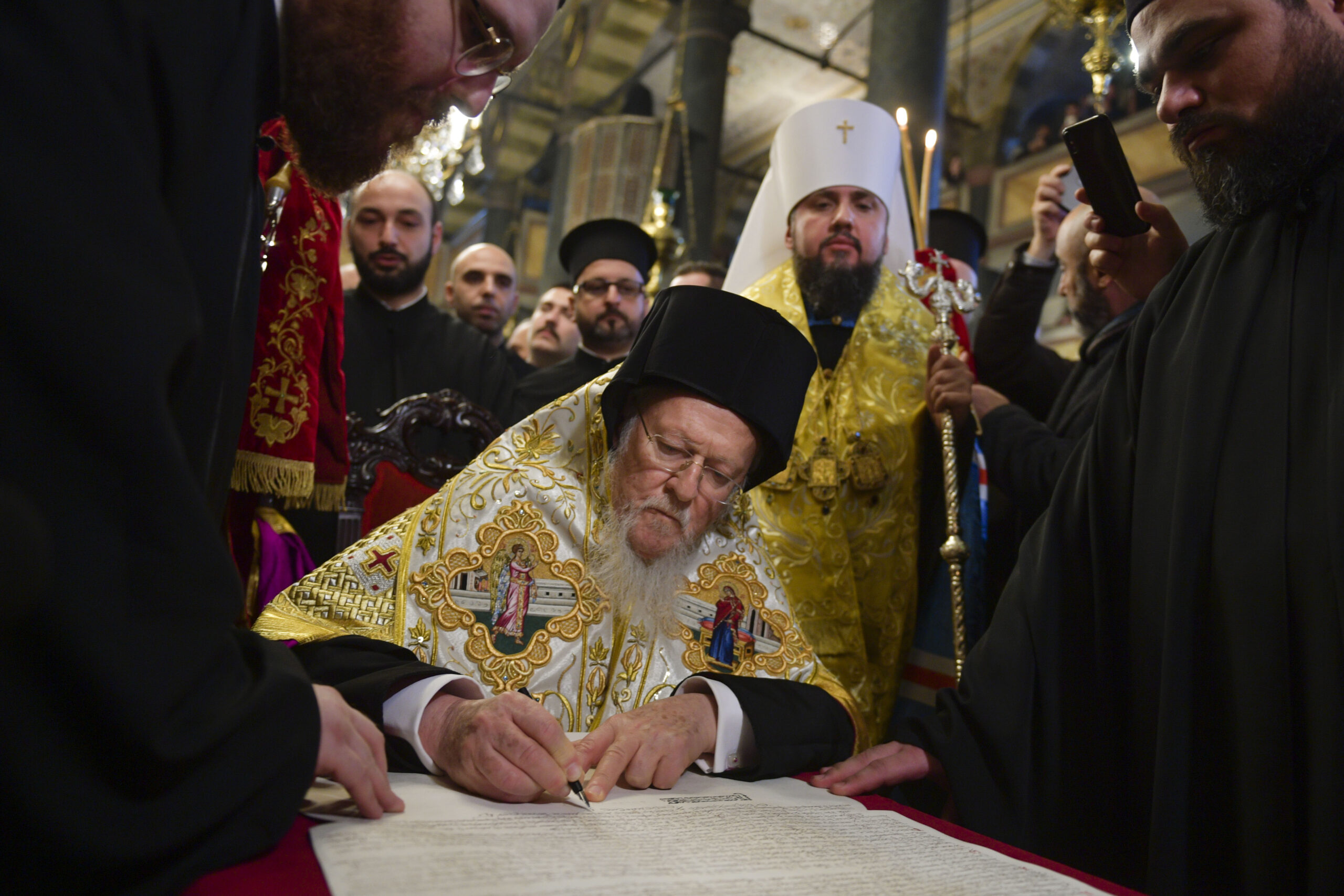 The religious consequences of the Russian assault

On January 5, 2019, the Ecumenical Patriarchate of Constantinople based in Istanbul has granted the autocephaly, in other words, the ecclesial independence to the Orthodox Church of Ukraine through a patriarchal tomos or decree. By doing so, Constantinople reunified as much as possible, the excessively divided Ukrainian Orthodoxy. However, it also reversed its 17th century (1686) tomos which allowed the “Metropolis of Kyiv and all Rus” to be attached to the Moscow Patriarchate of the Russian Orthodox Church. It thereby took a critical step to antagonize Moscow which vehemently reacted and severed already precarious links to the Ecumenical Patriarchate of Constantinople. Moscow started to omit the name of Patriarch Bartholomew of Constantinople in the prayers during public worship services — a highly important testimonial in Orthodox tradition.

Moscow’s move is considered as the greatest split within Christianity since the schism of 1054 between Orthodoxy and Catholicism. Indeed, Russia sees Kyiv as the historic cradle of the Russian Orthodox faith and the Moscow Patriarchate lost a majority of its 12000 parishes in Ukraine after January 2019.

The Ecumenical Patriarchate is, according to a well-established Orthodox tradition, the “primus inter pares” institution, the first among the equals, meaning the first Church among mainly but not only, national Orthodox Churches, including Moscow. Nevertheless, the latter contested particularly since the conquest of Constantinople in 1453 by the Ottomans, its preeminence. Over the years it argued that it represents the absolute majority of 300 million Orthodox believers across the world. Indeed, the Russian Orthodox Church is by far the biggest Orthodox Church in terms of worshippers.

Ukraine is a majority Orthodox country with a sizeable Catholic population of Eastern Roman or Byzantine rite with around 4000 parishes and 5.5 million believers. They are under the jurisdiction of Rome. Their Church dates back to the late 16th century, 1596, as the Church Union of Berestia named after the present-day Belarussian city of Brest. Thus, it covers parts of Belarus as well. They are also called Uniates when some Orthodox Ukrainians and Belarusians united with Rome by accepting Catholic dogmas but retained their Byzantine rite and canonical peculiarities.

As for the Orthodox faith, following the January 2019 tomos there are now two Orthodox Churches in Ukraine. The autocephal “Orthodox Church of Ukraine” and the “Ukrainian Orthodox Church” who remained faithful to Moscow.

The Orthodox Church of Ukraine has around 7000 parishes regrouping around 60 percent of the total Orthodox population under its authority.

Additionally, the Ukrainian Orthodox Church still under the Moscow Patriarchate gathers around 15-20 percent of the Orthodox population, mainly located on Russian border areas.

Regarding the positions of the religious authorities in Ukraine, in addition to Orthodox and Catholics, the Jewish and Muslim communities have in unison condemned the assault. As for the world’s top Christian religious authorities, both the Pope and the Ecumenical Patriarch of Constantinople Bartholomew have rejected it in strong words although Franciscus stopped short of naming Russia.

Bartholomew, ten days before the beginning of the assault, called on all religious leaders and those in positions of power, as well as all persons of goodwill, to strive for a peaceful resolution of the dangerously escalating situation in Ukraine. And few days after the first shots on 27 February, he stated:

“Even in the most unfavorable circumstances, such as today, where the world community is following with horror Russia’s, beyond every sense of law and morality, military attack and unprovoked invasion of Ukraine, an independent and sovereign state, or perhaps even more so now as the fiercest conflict since the time of World War II unfolds in Europe, in our neighborhood, we direct our prayers to the Lord Jesus, the Ruler of peace, asking Him with a fervent soul that He “will give strength to His people” and “bless His people with peace” (cf. Psalm 27:11). The Holy Great Church of Christ unceasingly chants the angelic hymn throughout the ages: “peace on earth and good will to men.”

Indeed, during the last few days, a tragic humanitarian catastrophe is unfolding in Ukraine. A war, which, like any war, is an abominable and reprehensible situation. It is the domination of irrationality over reason, hatred over love, darkness over light, death over life.

Again, from this position, we address another plea to end the war now! To immediately stop any act of violence, anything that spreads pain and death. Let reason prevail, love for fellow human beings, reconciliation, and solidarity, the light of the Risen Christ, the gift of life.

We express our full sympathy to our brother, the Primate of the Church of Ukraine, His Beatitude Metropolitan Epiphanios of Kyiv, and our unwavering support to all the seriously suffering Ukrainian people, who have a deep faith in God and chose to live freely and to determine their own lives, as every nation deserves. Although, unfortunately, some have come, these days, to the point of questioning even their historical and national existence.

Our thoughts are constantly with the wounded and with the families of the innocent victims, irrespective of their ethnic identity, and we pray for the rest of their souls to the Lord of Life and Death. We are certain that the Lord will hear our prayers and will not abandon his beloved children in Ukraine.”

On the opposite end, the Moscow Patriarchate and the Metropolitan Kirill sided entirely with Kremlin as he always did since the beginning of Putin’s tenure. One should add to his obeisance to the regime similar marks of loyalty by Russia’s other faith leaders, be it Jews or Muslims.

Metropolitan Kirill, at the occasion of the beginning of Orthodox Lent for instance, repeated the official Russian narrative on the “genocide” of Russian loyalists in Donbas, the breakaway eastern region of Ukraine, held since 2014 by Russian-backed separatist groups. He never mentioned the invasion, the war, and the indiscriminate slaughter of Ukrainian civilians in his speech.

He uttered instead: “We have entered into a struggle that has not a physical, but a metaphysical significance”.

In fact, the Ukrainian Orthodox Church’s relations with Moscow had already started to sour when Russia annexed Crimea in 2014, resulting today in a total crisis of confidence.

All in all, the worldwide isolation of Russia continues also in the world of faith. But at home, the picture is quite different. A recently inaugurated Russian cathedral displays signs of grotesque expansionism with a mosaic of angels smiling down on the soldiers for their heroism in the invasion of Georgia, the annexation of Crimea in 2014, and the triumphs in Syria.”

Everything, including the spiritual forces, is good to be used and abused for Putin’s war machine.

Previous article
Turkey’s Response to the War in Ukraine
Next article
Can Erdogan return to Democracy?