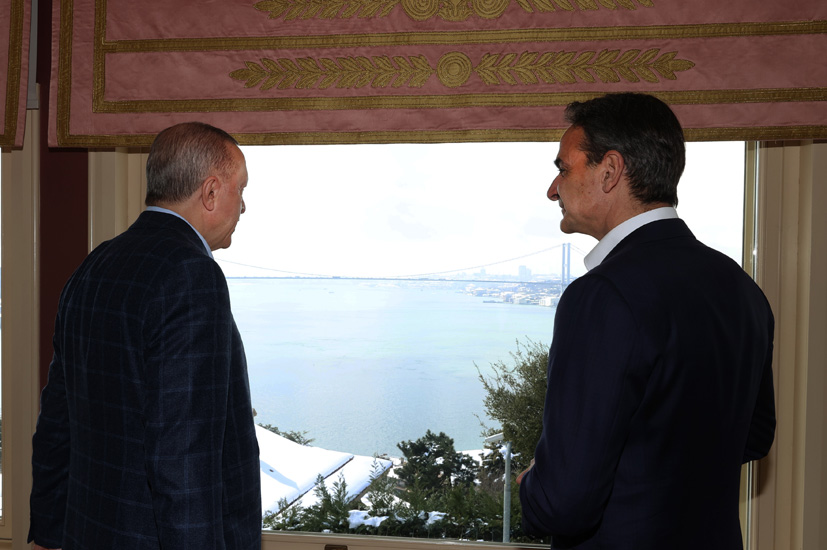 Turkey as an Equation with many Unknowns

There are signs that Turkey’s foreign policy is changing. A few months before the Ukraine crisis, Turkey showed its new intentions: To improve its relations with the countries it experienced controversies with.

The United Arab Emirates which recently was accused of acting against Turkey and even of backing up the coups against the Turkish government has now become a friendly country and was visited by Recep Tayyip Erdogan in February. Turkish-Egyptian exploratory talks began in September with the intent of normalizing tense relations. Visits to Saudi Arabia and contacts with Tobruk-based Field Marshal Haftar are planned; these are all signs that Turkey is determined to improve its recently hampered relations with the Arab World.

Contacts with Armenia have resumed after a long duration of tense relations.  Even Macron who was characterized by Erdogan as “in need to get his mental health checked” is now considered a normal interlocutor. Erdogan seems eager to be in routine conversations with the USA and especially with President Biden to solve standing disagreements, especially relating to military equipment.  A very important step was the resumed contacts with Israel. Until recently, Israel was demonized as the sole responsible for the suffering of the Palestinians and as a country participating in anti-Turkey alliances.

All these occurred before Russia’s invasion of Ukraine.  However, Turkey’s foreign policies began to be discussed with apparent increased interest after the Ukraine crisis. There seem to be four reasons for this interest.

2- Turkey was much discussed for its role in the fighting as well. Turkey was the supplier of Bayraktar, the unmanned aerial vehicles, a weapon that proved useful to the Ukrainians.

3- Turkey came to the agenda because the Ukrainian crisis changed the status of friends and foes in Europe, too. The countries of the European Union and of NATO, probably for the first time in the last decades, acted jointly, fast, determined, and without hesitation against the Russian invasion. The situation during a war does not allow for hesitant and dubious positions in the crucial moment of fierce fighting. Turkey, singled out with its “cautious” stand by not joining the imposition of economic sanctions to Russia.

4- Finally, the Ukraine crisis made apparent the need for energy sources other than the Russian ones. Turkey appeared as the country that would enable the transfer of gas from the East Mediterranean – Israel, Cyprus, and even Egypt – through Anatolia, which would be an economically feasible route to build a  pipeline.

The plethora of questions

For each of these “reasons” that render Turkey a crucial and important partner many more difficult questions obscure this image.  Even the policy of “improving relations” with recent adversaries embodies serious doubts: does improving relations mean returning to a previous situation or do some of the recent grievances still remain?  The belief that people, politicians, and nations forget the recent past and once an agreement is reached they will act as if nothing preceded, as if nothing humiliating has been uttered and nothing harmful has been done may be a cynical and unrealistic assumption.

That is, to what extent can Turkey heal the wounds incurred during the period its relations were deteriorated? How long will it take, for example, for Israel and Egypt to trust Turkey the way they did, say ten years ago? Will Turkey be perceived as a trustworthy ally by the US once the S-400 impasse is solved? Or will the new alliances be judged as short-term tactics and a forced truce? How easily is damaged trust gained again?

Sometimes it is forgotten that apart from the term “partner”, there is also the term “reliable partner”.

When the four points mentioned above are observed in this perspective, some “advantages” of Turkey that arose with the Ukraine crisis may allow a second reading. The equal distance kept from the fighting sides, Ukraine and Russia, and not participating in the sanctions imposed, may be seen as an act of impeding the solidarity of NATO and the unanimity of the West. With such an evaluation, Turkey may appear – for a second time – as a potential country that will be helping Russia evade the sanctions of the West.

The policy of Turkey reminds us of when the Ottomans kept a balance between the Big Powers and managed to survive in the nineteenth century. There is a difference, however. The Sultans secured alliances and “friendships” in this direction. Turkey, or to be more specific, the last ten years of Erdogan’s “balance”, resulted in tense relations with almost all of the countries he dealt with. Instead of an advantage due to a “balance”, the situation is now turning into an impasse with both sides – Russia and the West – becoming restless and annoyed from seeing Turkey as “not being on our side”. The European Union and NATO feel they are threatened by Russia; and in a war situation they expect solidarity from Turkey, and not as an intermediator in the conflict.

Finally, Turkey appears crucial in securing the passage of gas from the East Mediterranean to Europe. The visit of the Prime Minister of Greece to Turkey and his meeting with the President of Turkey a few days ago may be related to this urgent need for new gas sources. This necessitates the inclusion of Cyprus in this project. Turkey in this case is problematic too, being the only country that does not recognize the Republic of Cyprus.

In other words, the advantages and potential solutions that Turkey advances are troublesome at the same time. They are characterized by ambiguity and they appear inconclusive.  Each positive step – in favor of its allies – contains contradictions and uncertainty. It looks as if Turkey is reluctant to harmonize its pace with the “West” which also voices its expectations for a more democratic society. Leaders like Putin, on the other hand, feel at ease with the practices of Turkey in this domain.

These uncertainties are the result of the choices made lately by Turkey, but the choices are simply the unavoidable results of some basic political decisions taken initially. These were not even strategic decisions, but only tactical steps taken to respond to various challenges. The foreign policy of Turkey is on a dubious track due to the balance of power and the politics within Turkey. Put as headings: The one-man uncontrolled leadership, the partnerships with ideologically extremist parties and groups, and the ambition to stay in power at any cost led to the “wrong decisions” and to the isolationism of Turkey. The decisions are wrong because the “setting” is not right.

The current foreign policy of Turkey is characterized by hectic ad hoc decisions that serve ephemeral needs. This is a pity because the political conjuncture in Europe is suitable to choose to become a “reliable” partner and to align with the basic democratic principles and alliances.

The latest acceptance by the European Union, Strategic Compass states that “Turkey has used a mixture of border politics, information manipulations and provocative maritime actions to undermine security in the Eastern Mediterranean.” Right or wrong, this is a statement showing that Turkey is perceived as a contentious partner.

Previous articleBeyond the Halo Effect: Can Turkey Defend Itself in a Conventional War?
Next articleThe Comparison of Armed Unmanned Aerial Vehicle Systems with Bayraktar