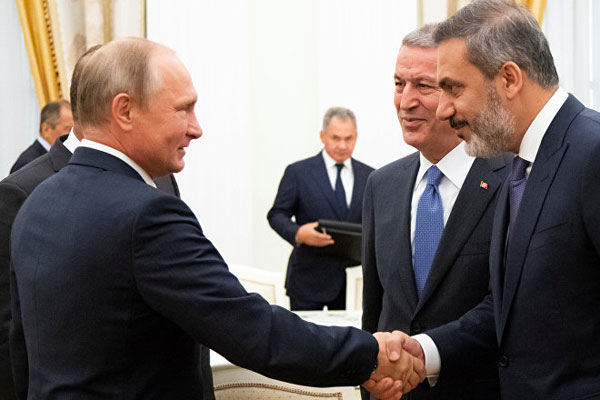 Rethinking the Value of Turkey in NATO and Hulusi Akar

With Russia’s invasion of Ukraine, Turkey’s place in NATO has become even more critical in parallel with Europe’s comprehension of how vital NATO is. Turkey’s geostrategic location also reinforces its increasing importance. Therefore, in recent days, Turkey’s NATO allies and NATO leaders have been emphasizing the importance of Turkey more frequently. In particular, unlike recent years, a new mechanism is attempting to be executed between Turkey and the West through the Turkish Armed Forces (TAF). Do the expectations created by assuming that the TAF maintains its former position in Turkey have compatibilities with Erdogan’s Turkey? Can Turkey’s increasing prominence in NATO, the pact of democratic values, play a role in its return to democracy?

The state is the abstract institution of folks or a nation. Typically, that institution is born from people’s values. Therefore, folks or nations establish their state. However, in Turkey, the order is the contrary. The state was established first. Then that state also founded the Turkish nation. Since this structure was not organic, the establishment process could not be completed, and this order reflected as ongoing repeating political and social crises.

Yes, Turkey was founded by soldiers. Constituent leader Mustafa Kemal Atatürk (President-1923-1938) was a soldier famous for his heroism and achievements on the fronts. İsmet İnönü (President-1938-1950), who succeeded him, was another soldier, his comrade in arms. The Republican People’s Party (CHP), Turkey’s constituent party, which almost all other political parties in Turkey have sprung from, was founded by soldiers. The “six arrows” that express themselves in the emblem of the CHP also represent the six principles of Kemalism, which is the basis of the Turkish Constitution. When the Democratic Party (DP), which took power after the CHP (1950), moved away from these six fundamental principles, there was a military coup (1960), and the soldiers, who were the voices of the Kemalism, constituted the National Security Council (MGK), which was above the legislative, executive, and judicial institutions, to protect the Kemalist regime (1961). Thus, the soldiers retook control of the state. Even though the decisions of MGK were announced as recommendations, they were implemented as final decisions.

Turkey is a unitary state. Furthermore, the unitary state is based on the principle of “dominance of the central government.” Here, the question of “what or where is the state’s center in Turkey” naturally comes to mind. In Turkey, if not in every unitary state, besides institutions such as the legislative, executive, and judiciary, an institution above them controls, directs, or at least influences them as a secret hand. That institution is the MGK mentioned above. MGK prepares Turkey’s National Security Policy Document and determines Turkey’s domestic and foreign policy. The National Security Policy Document is a secret constitution that only those who require it for knowledge or execution know, and no one dares to object against it.

Erdogan, who has been trying to redesign and control the state’s center since he came to power in 2003, made his attempts to penetrate the state’s center even more systematic after 2010. He tried to increase the effectiveness of civilians under his dominance by expanding MGK members in 2003. These attempts by Erdoğan were presented as reforms to comply with the European Union, democratization, and breaking the military tutelage. In fact, it was a fishing rod and most democrats swallowed it. Therefore, they supported Erdoğan. On the one hand, Erdoğan hoodwinked democrats with the so-called reforms (the reason I said so-called is because Erdoğan abolished most of the reforms after a short time); on the other hand, he established a new center for the state, and indeed, made his authority the center of the state.

While the TAF was rendered immovable by the operations launched as breaking the military tutelage, the National Intelligence Organization (MİT) was structured to replace the TAF for seizing the state’s center with new appointments and new legal powers. The appointment of Hakan Fidan as MİT Undersecretary in 2010 was the first move of the new order. In parallel with this, with the appointment of Hulusi Akar as the Land Forces Commander in 2013, Erdoğan accelerated his efforts to change the center of Turkey by providing coordination between the two institutions. There is undefinable cooperation and coordination between Hulusi Akar and Hakan Fidan. It is believed that Hakan Fidan, whom Erdogan describes as “my black box,” also influenced Hulusi Akar.

The first operation of transforming MİT into the state’s center was the 2011 Roboski Massacre. As a result of false intelligence given by MİT, 34 Turkish citizens were believed to be terrorists and were killed by bombing with F-16 fighter aircraft. The misfortune of being an army that had bombed its own citizens was one of the most significant losses of reputation in the history of the TAF. One may think, “did MİT, which wanted to seize the state’s center, set a trap for the TAF?”

In 2012, the Turkish General Staff Electronic Systems Command (GES) was transferred to MİT. With Turkey’s highest-capacity intelligence and listening base connected to MİT, the Turkish Armed Forces was blinded. With its subordination of Turkish police and gendarme intelligence to the National Intelligence Coordination Board chaired by the MİT Undersecretary, all security units in Turkey, except MİT, have been deprived of their ability to receive/gather information and carry out operations. Thus, they have been transformed into puppet institutions that can act according to the information given by MİT.

On January 6, 2021, the president’s decree arranged the transfer of “movable goods and vehicles belonging to the TAF” to the National Intelligence Organization if deemed necessary. It is helpful to express the breadth of the term “movable goods and vehicles” here. In other words, “everything” except reinforced concrete buildings. It could be the “leopard tank” or the “F-16 fighter” aircraft. Is MİT becoming the alternative Turkish Armed Forces?

At last, starting from 2014, it has been rendered impossible to investigate and prosecute MİT staff, even if they have committed crimes, and thus they have been dressed in an armor that is not found in any institution. Before Erdogan’s rule, the soldiers had such a position. No one had dared to prosecute soldiers. However, the TAF would conduct Military Court trials within itself. There is no judicial institution within MİT. Today, while soldiers can be prosecuted, no institution prosecutes MİT staff. Thus, MİT has naturally been left out of the judicial mechanism.

As a result of all these developments, we can say that the state’s center was moved from the TAF to MİT. MGK also makes recommendations based on the intelligence they receive from MİT.

With MİT becoming the state’s center in Turkey, this institution began to take all government-related decisions. It is now MİT that decides on all state operations; from who will be the Chief of the General Staff to the recruitment of a non-commissioned officer, from who will be the rector of the university to the appointment of a research assistant, from merchants to be given credit from a bank to companies to be granted contracts, and to all political activities in the government or opposition. Even if Erdoğan’s signature is under everything, MİT gives him decisive intelligence in the decision-making process. While MİT provides clean records even to Justice and Development Party’s (AKP) candidates during the election, even the opposition can apply to MİT when appropriate. Most recently, Good Party Leader Meral Akşener applied to MİT to obtain the clean records of her provincial president.

In Erdoğan’s Turkey, the center of the state is now MİT. As the military did in the past, MİT is designing old and new political parties on the one hand and taking social, civil, and religious organizations under its control on the other.

The developments are not limited to this. After the coup attempt of July 15, 2016, the structure of the TAF was primarily transformed into a structure that is dependent on Erdogan. After that date, until today, almost all of the soldiers with the rank of general, except for a few, were either expelled or retired and liquidated. On the other hand, 95 percent of the staff officers trained with the NATO doctrine were purged, and approximately 50 thousand officers and non-commissioned officers were expelled from the TAF. In their place, 70,000 new officers and non-commissioned officers, who were thought to be loyal to Erdoğan, were appointed.

In conclusion, the TAF is not the old TAF that NATO imagines. Today, the TAF cannot influence, direct, and change society or politics. It cannot even be said that the top administration of the Turkish Armed Forces dominates the entirety of the Turkish Armed Forces. Therefore, the mechanisms established over Hulusi Akar, who is alleged to be pro-NATO, do not have a hundred percent equivalency within the TAF. Nobody in TAF, Turkish politicians, and civic society trusts Hulusi Akar because he is the number one suspect in the July 15 Coup Attempt. The mechanism established over Hulusi Akar will only give Erdoğan time to construct the totalitarian order he fantasizes about. It is almost impossible to emerge democracy from this current mechanism.

Previous article
Turkey: Westerner in word, anti-Western in deed
Next article
Refugees in Turkey are Becoming a Lethal Electoral Argument