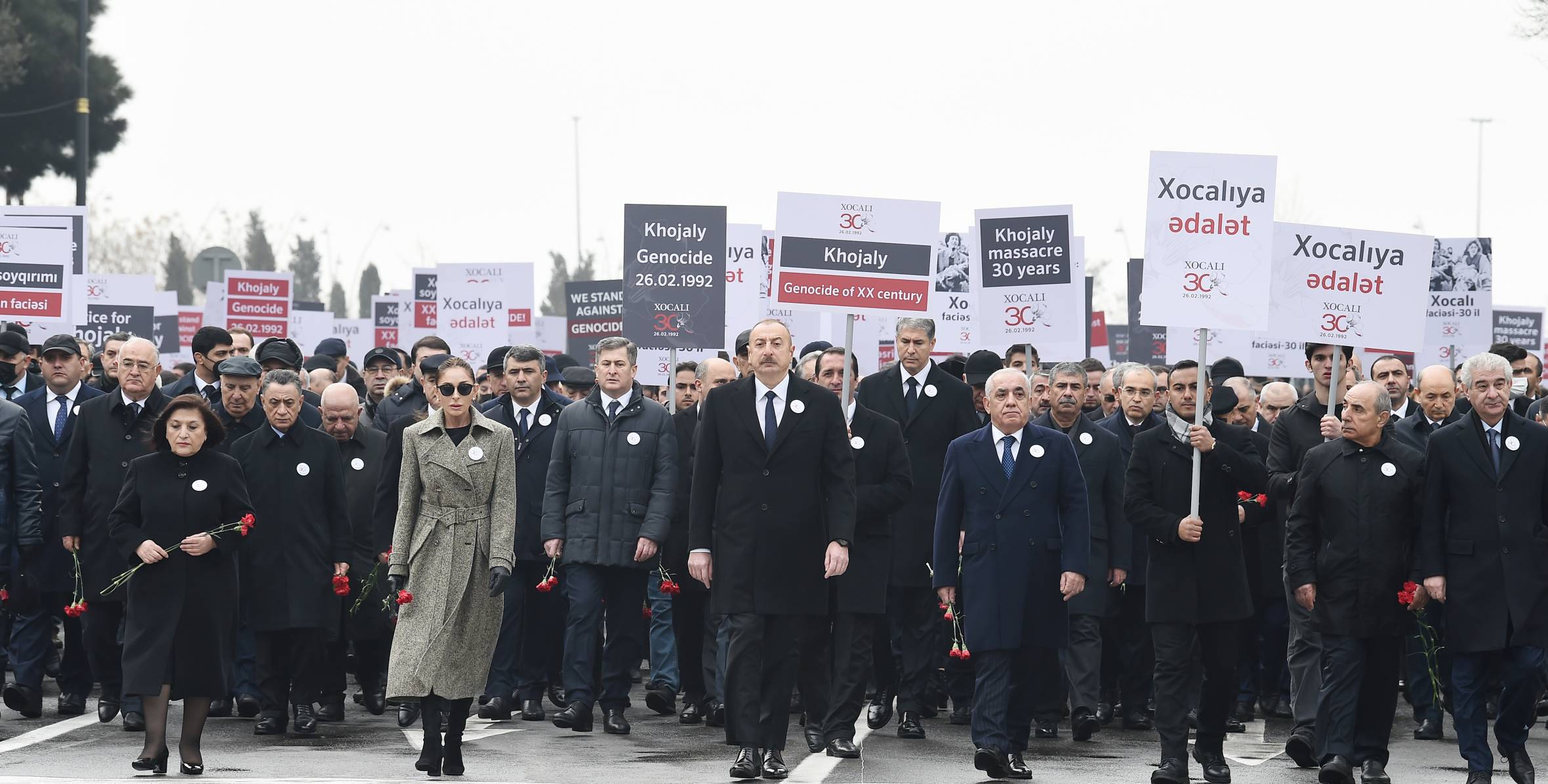 When Japan attacked China in 1937, it carried out a massacre that came to be known as the Rape of Nanjing. The death toll ranged from 50,000 to 300,000, accompanied by widespread devastation of property and community.  Closer to today, the 1992 massacre in Khojaly has come to be known as Azerbaijan’s own traumatic version of Nanjing.  Khojaly signifies Azerbaijan’s darkest, most traumatic page from its history.

Serz Sarkissian and Seyran Oganyan of Armenia, just as with the Japanese generals Iwane Matsui and Hisao Tani, usurped and disintegrated all vestiges of humanity for the cause of nationalism.  The difference between the massacres of Nanjing and Khojaly is that both Japanese generals were hanged for war crimes while Sarkissian, who commanded his nation’s military units, became president of Armenia. Meanwhile, Colonel Oganyan has never been questioned about his actions or orders.

What happened in Khojaly on the night of February 26, 1992 was the first organized massacre of innocent civilians by the Armenian military; the opening chapter of the first Nagorno-Karabakh war.  The deadly operation forced Azerbaijanis to leave their homes, villages and towns with barely any notice or preparation in advance.

Armenian forces, with the help of the 366th motorized infantry brigade of the Russian interior ministry, occupied Khojaly and carried out one of the worst ethnic cleansing attacks in the history of the Karabakh region.  According to various reports by international human rights organizations, at least 613 Azerbaijani civilians, including 106 women and 83 children, were murdered.  A total of 1,275 were taken hostage, and even though many were eventually released, the fate of 150 are still unknown, nearly 30 years later.  The worst of the massacre was that the Armenians, after disabling and robbing property from the elderly and female Azerbaijani civilians, allowed them to leave their village and encouraged them to spread rumors of brutality. It was an Armenian tactic to neutralize any potential resistance and force other Azerbaijanis to flee their homes so that occupying forces could steamroll their way through the region.

In addition to Azerbaijan’s humiliating suffering surrounding the Khojaly massacre, the aftermath emphasized the indiscreet inhumanity exercised by Armenian militias; and the eventual securitization of the Azerbaijani national identity.  Azerbaijan’s post-war identity evolved not out of the country’s positive values but instead from the acute pain of remembering how Armenian forces had devastated on a wholesale scope every vestige of the Khojaly community. Thus, Khojaly quickly consolidated the symbolic crux of Azerbaijan’s sense of victimhood. The strands of that theme have reverberated in school textbooks so that future generations of Azerbaijani citizens would never forget what occurred.

However, the trauma of Khojaly also became the fount of courage for emerging generations of Azerbaijanis. In particular, the Armenian occupation and devastation of Shusha, Azerbaijan’s capital of its cultural heritage, magnified the national sense of victimhood, which bound together all segments of the national Azerbaijani community.

The Armenian forces occupied close to 20 percent of Azerbaijani territories and ethnically cleansed more than 700,000 civilians, uprooting them from their ancestral homes. For those in Khojaly and other occupied towns which resisted expulsion, they were killed and the institutions that represented their cultural heritage were looted. The occupation’s barbaric nature was acutely evident in Aghdam, where the city’s entire population of 70,000 was eradicated completely. Aghdam became the “Hiroshima of the Caucasus.”

The Khojaly massacre was the centerpiece of the Azerbaijani state’s efforts to resurrect and revitalize the dominant national narrative of suffering that legitimized an identity of victimhood for the country’s people. Khojaly became the linchpin of the collective Azerbaijani efforts to reclaim national dignity and respect.

Khojaly exemplifies what Pierre Nora, a leading scholar of the phenomenon of collective memory, calls a “memory site” that has multiple dimensions of meaning. One is the “unmastered past” of the Karabakh conflict. Another is the unconditional display of inhumanity of one group against another. A third is the attempted existential threat to abolish the sense and claims of Azerbaijani culture and history of their ancient lands. Other dimensions are the power of racist nationalism, the international community’s diplomatic failures, and the power dynamics of resistance.

It was the trauma of Khojaly that defined and motivated the public sphere of Azerbaijani discourse of victimhood culture. Its national discourse, politics, and the holistic goals of the missions of the country’s state institutions were concentrated around the humiliating loss of the Karabakh region.  This emboldened postwar unity and the Azerbaijani state has managed to orchestrate the public debate to consolidate the preferred Azerbaijani identity and to ask the public to endure hardship in order to rectify the historical injustices.

Khojaly ultimately represented the rebirth of the Azerbaijani nation which waited for three decades to find peace and return to a normalcy that existed before Khojaly. In the absence of concrete diplomatic progress, in 2020, Azerbaijan took matters into its own hands and liberated its occupied territories. More than 3,000 Azerbaijani soldiers, many of whom learned about Khojaly in school, sacrificed their lives in 2020 with the Second Karabakh War.

Azerbaijan’s victory, at best, has alleviated the pain of the country’s past humiliation. Yet, the conflict cannot be characterized as resolved and there are signals of yet another chapter being written. If there is to be peace and reconciliation, it can only occur by articulating a shared narrative for Armenians and Azerbaijanis to resolve their commitments mutually for a peaceful, stable region.