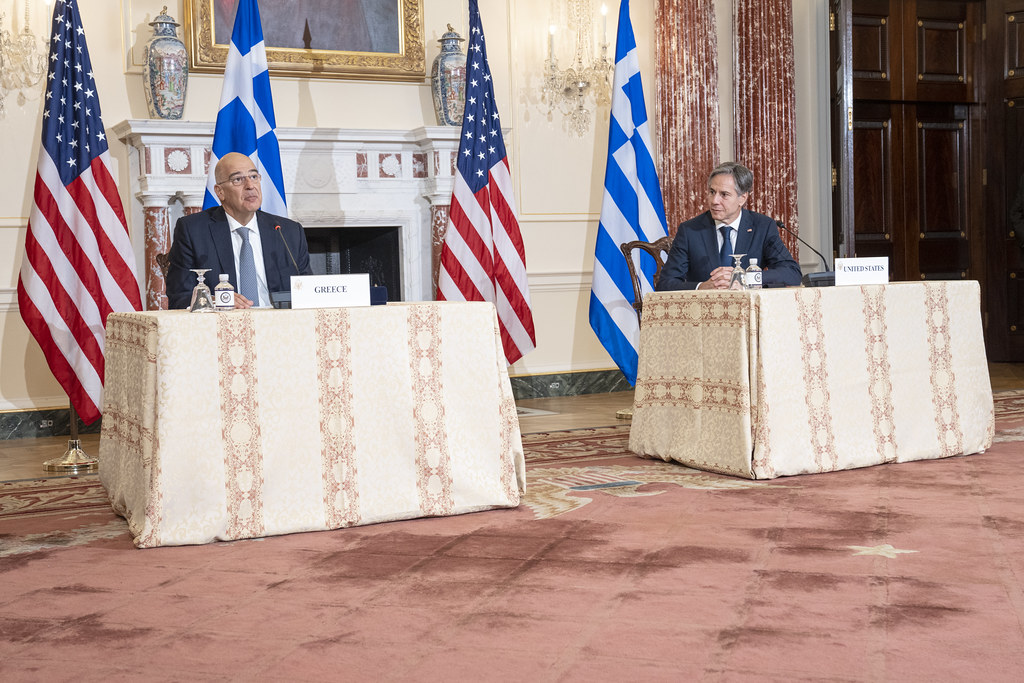 Erecting a security cordon around the new security threat Turkey

Even before the public life kicked off earlier this year, U.S. Deputy Secretary of State Wendy Sherman called the Greek Foreign Minister Nikos Dendias to declare the following, according to the Spokesperson Ned Price:

“Deputy Secretary Sherman and Foreign Minister Dendias stressed the importance of promoting solidarity and stability in Europe, including support for Ukraine’s sovereignty and territorial integrity. The Deputy Secretary and Foreign Minister also underscored the importance of continued coordination among NATO Allies and partners, including through the preparation of unprecedented economic measures, to deter Russia from further military action and aggression”.

This seems no coincidence. Over the past few years, Greece has become a strategic country in the Eastern Mediterranean sub-region for NATO and the West in general, to the detriment of Turkey. In particular, the U.S.-Greece ties have been developing fast since 2018 through a number of meetings focused on strategic dialogue and the upgrade of military cooperation.

The background is set by the U.S.-Greece Mutual Defense Cooperation Agreement, the MDCA which has allowed U.S. forces to train and operate within Greek territory since 1990. On Oct. 14, 2021 at the renewal ceremony for MDCA, the State Secretary Blinken recalled:

“The MDCA is the bedrock of our defense cooperation. Today’s amendment extends the MDCA’s validity, making it consistent with other bilateral defense cooperation agreements between NATO Allies and durable enough to allow for Greece and the United States to advance security and stability in the Eastern Mediterranean and beyond”.

The backbones of the MDCA between the two allies are the naval support activity at the deep-water port and airfield at Souda Bay in Crete and now a multi-purpose presence at the Port of Alexandroupoli in Western Thrace, right at the border with Turkey. Alexandroupoli is rapidly becoming a NATO naval asset and Souda Bay is already helping to inspect Russia’s naval activities in the sub-region.

Here is how one of the main actors of the enhanced cooperation between the two allies, the outgoing U.S. Ambassador to Greece Jeffrey Pyatt was describing the endeavors on July 2020:

“Our presence here (Alexandroupoli) today sends a clear signal to all who are watching that the United States is committed to working with Greece to advance our shared security and economic interests. Alexandroupoli plays a strategic role in our countries’ common goal of building European energy and regional security. The city is poised to become a regional energy hub with the completed market test for the FSRU terminal and plans for a gas-fired GE power plant; a transportation, defense, and security hub with the geostrategic location of its port, rail, and road networks feeding into southeastern Europe; and a commercial hub with the port’s upcoming privatization”.

All these have happened rather quickly over the past few years. The Trump administration was already qualifying Greece as “reliable partner” as opposed to a growingly “unreliable” Turkish partner. And although the enhanced partnership between Greece and the U.S. could not be credited directly to the weakening Turkish-American partnership, that has certainly played a part.

While the two neighbors and the U.S. are NATO partners and are supposed to cooperate against common security threats, particularly from Russia, and thus all three countries are part of the security architecture of NATO’s south-eastern flank since 1952, it is obvious that Turkey has gone through a 180 degrees shift to become a security threat itself, threatening its allies.

In fact, particularly since 2013, the Turkish government’s increasingly totalitarian drive has had negative impacts domestically as well as internationally. As a result of its gunboat diplomacy, open threats of force, irredentism, expansionism, revisionism, illegal occupation of foreign lands, supporting non-State Foreign Terrorist Forces, abusing refugees as a hybrid/non-conventional threat, Turkey has become a hard power taking increasingly the shape of a regional security threat. Its neighbors and traditional allies have taken note of these new occurrences and quickly moved to take necessary measures to contain it militarily and economically (Egypt, France and the United Arab Emirates need to be mentioned as well within this security cordon to contain Turkey in the Eastern Mediterranean sub-region). Greece’s U.S. connections need to be considered also in view of this new set of realities emerging from its eastern neighbor.

The Ankara regime has thoroughly reviewed and altered its foreign relations by distancing Turkey from its traditional allies, by strategically cooperating with the common adversary, Russia. As for Greece, the general U-turn has taken the form of a bellicose approach to old divergences existing between the two countries. In other words, the modus operandi through which the Ankara regime has decided to deal with these divergences has speeded the obligation to build a security cordon around Turkey with the active involvement of the U.S. This in turn has, in a way, aggravated the old feuds as Ankara started to feel the heat. At the end, unable to challenge directly the U.S. and thus limiting its discontent to verbal accusations, Ankara has amplified its bellicose rhetoric and actions towards Greece.

Most likely, the landmark incident that has kick-started Ankara’s “new” Greece approach was the refusal to extradite eight Turkish draft evaders right after the so-called coup d’état of July 15, 2016. These eight soldiers have escaped with a helicopter to Greece where they sought asylum. Ankara was quick to ask for their extradition, qualifying them as Gülenist coup plotters, as it does with anyone and everyone without proof. The Greek government led by Syriza has finally refused to comply with Turkish request. Thanks to the active support and involvement of the Greek rights defenders, it granted asylum to eight draft evaders.

Furious, Erdogan has started to not only accuse Athens of complicity but also to resort to a sort of revenge and/or punishment tactic by exacerbating the old divergences, adopting a maximalist approach on them and categorically rejecting peaceful dialogue and negotiation.

1 – During his first and last official visit to Athens on December 2017, Erdogan brought up the Lausanne Treaty, challenged its practicality and called for its revision. He wilfully or inadvertently overlooked the fact the Treaty, as one of the founding acts of the Turkish Republic and a key international document which defines the Greco-Turkish modus vivendi of the 1920s, is non revisable.

2 – The so-called Mavi Vatan or the Blue Homeland doctrine which grossly disregards the very existence of Greece’s Aegean islands has become a quasi-official policy after 2016. The doctrine was first uttered on June 14, 2006 by a then active admiral Ramazan Cem Gurdeniz, at a symposium held at the Turkish Naval Forces Command Center. A typical anti-Western and ultranationalist soldier, Gurdeniz is obsessed with the naval supremacy of Turkey in its Blue Homeland which corresponds to the continental waters surrounding the land mass.

According to him Turkey’s self-declared maritime jurisdiction areas include the territorial waters, the continental shelf and the exclusive economic zones in the Black Sea, the Mediterranean and the Aegean. “The surface of this homeland, its water body, its bottom and the landmass under the bottom are ours. The size of this homeland is equal to half of our landmass” Gurdeniz argued. Indeed the Blue Homeland corresponds to 462.000 sq. km! The retired admiral criticizes the old republican elite as too liberal towards Cyprus and Greece, incapable to respond adequately to what he calls as fait accomplis since the 1930s. His magic formula consists of imposing deals by force, which fits perfectly with Erdoğan’s power politics.

3 – The third example is part and parcel of the Blue Homeland doctrine and consist of an absurd sea delimitation deal enshrined in a MoU signed in 2019 between Ankara and the then government of Libya. Bypassing and disregarding Crete and its landmass, the deal draws a curved line between Turkey’s southwest and Libya’s northeast! Based on this deal Ankara pretends today to its “rights” in the south of Crete!

4 – Within the framework of Blue Homeland Ankara’s sovereignty claims for around fifteen Greek islands in the eastern Aegean Sea are revived with the active support of the opposition parties.

5 – There is a visible manifold activity in Turkish part of northern Cyprus. Ankara is now openly advocating a separate Turkish state in this territory, making moves to start building projects in no-go zone of Varosha, builds two large naval bases in the coastal towns of Morphou and Iskele and claims the ownership of Cyprus’ seabed for fossil fuel production which it desperately needs.

6 – Finally, the unconventional hybrid threat whereby Ankara organized an assault of bussed refugees in early 2020 against the land border with Greece at Evros/Meric River. Ankara actually executed Erdogan’s relentless threats of sending refugees to Europe, that he has been mentioning since 2018.

Today, the enhanced U.S. cooperation with Greece and their presence in the Eastern Mediterranean sub-region addresses the security threat posed by Ankara, but also intensifies Turkey’s ire and therefore its predisposition to use force, even though it would be self-destructive.

Previous article
Single Goal of Erdogan’s Foreign Policy: Staying in Power at the Expense of Turkey’s National Interests
Next article
The US and Turkey Relations: Return to Cold War