Can Turkey return to the West once again?

This paper will make the claim that Russia’s invasion of Ukraine will force Turkey to return its face to the West once again.

Based on reasons inherited from the history of Russia and have been adapted to the present-day, Putin began to invade the territory of Ukraine on 24 February 2022. Turkey should be one of the countries that reacts the most to the invasion, which, if successful, would mean the enlargement of Russia. The final step of Russia’s expansion is the violation of Turkish sovereignty. Despite this fact that the Turks are well aware of, the Turkish government, unlike the Western and Democratic countries, is responding to the Russian invasion of Ukraine with an unclear policy.

In his march to establish a Great Russia, Putin, who entered a new phase with the invasion of Crimea on March 18, 2014, has taken Turkey, one of the possible significant and historical obstacles against Russian expansion, under its hegemony before the invasion of Ukraine. He has also put and raised the agents of influence in Turkey into forceful positions. Thus, it has made Turkey immobile in domestic and foreign policy and has also succeeded in limiting NATO’s range of action by inducing it ineffective.

Towards an order of autocracies and democracies

When Joe Biden began to serve as president in the White House in 2021, one of his first actions was to start working for the Democracy Summit. After an extensive preparation period, former members of the Commonwealth of Independent States; Moldova, Ukraine, and Georgia, attended the Democracy Summit held in December 2021, while NATO members Turkey and Hungary were not invited to the Summit. Thus, a clear message was given to authoritarian leaders that were on the rise against democracies.

The nature of autocracy is secrecy rather than transparency. Since it is an order contrary to human nature, it needs to be hidden. Before the Democracy Summit, Vladimir Putin had already implemented a secret alliance over authoritarianism.

While authoritarian leaders administrate most of the member states of the Commonwealth of Independent States (CIS), authoritarian leaders also administrate Turkey, Hungary, Poland, and Serbia, which are neighbors to Russia even though they are not members of the CIS. That is an expansion of the Near Abroad policy of Russia. The autocratization of former Warsaw Pact members, such as Hungary, Poland, and Serbia, who lack democratic experience is understandable. However, the fact that Turkey, with its 70 years of democratic experience, stepped into autocracy under Putin’s wings cannot be explained with a simple drift.

Turkey has a rather painful history of democracy. Due to the continuing influence of the nomadic culture and the nature of the Turkish state tradition, the Turks could not move to democracy by their own choice. The steps taken by the Turks on the path of democracy are like a price paid to have the military aid of Western states against other external dangers. Otherwise, such a transition would be impossible because the Turks have not adopted democracy in essence. Intellectuals defending democracy have been subject to the pressures of the state and have had to pay a heavy price throughout Turkish history.

The 1839 Imperial Edict of Gülhane, the 1856 Edict of Reform, the 1876 Promulgation of the Constitution, and the 1952 Membership to NATO are the democratization stages of Turkey. Except for The Imperial Edict of Gülhane, the Turks had made democratic reforms in order to assure protection against Russian threats and dangers in all of the other democratization stages. There is a different threat in The Imperial Edict of Gülhane; Kavalalı Mehmet Ali Pasha’s threat from Egypt. Interestingly, when the threats decreased or disappeared, Turks began to make concessions from democracy and return to autocracy. The leaders of the Turks had thought that democracy was a luxury for the Turkish people, and they were content with democracy as a necessity.

In order to protect their territorial integrity against Stalin’s territorial demand, Turkey entered NATO in 1952 and made democratic reforms until the USSR collapsed. Then Turkey tented to autocracy and at the end of the 90s. A military tutelage was established. With Western support, Recep Tayyip Erdoğan made democratic reforms on the way to the EU in the first decade of his rule and struggled with authoritarian military tutelage. However, in the second decade of Erdoğan’s rule, the representatives of the military tutelage, which he had fought before, made an alliance, overthrowing the democratic order he had established in his first decade and establishing an authoritarian order in its place.

The establishment of the last autocracy in Turkey had a bloody and heavy bill. It is impossible for Turkey, a NATO member and candidate for EU membership, to transition to autocracy without the support of a great power like Russia. Authoritarian attitudes, which started with the Gezi Park Protests in 2013, reached their peak with the revealing of the corruption of Erdoğan and his circle on 17/25 December 2013. Erdoğan had believed that Gezi Park and the 17/25 December Corruption Operations were organized by the US-backed cadres.

Erdogan’s first move to approach Russia was to release Russia’s influence agents, generals, and officers, who were imprisoned for planning a coup, and ally with them. Erdogan’s alliance with the aforementioned Eurasianist cadres constitutes an important stage of his siege and/or hostage by Russia. On July 15, 2016, pro-NATO soldiers in the TAF were liquidated with a so-called coup d’état, and pro-Russian soldiers were brought in their place. 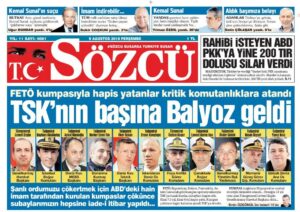 Sözcü Newspaper reported the arrival of Eurasian military officers to higher positions within the Turkish Armed Forces in its main headline.

After the transformation in the TAF, weapons such as the S-400 were purchased from Russia and Russian officers began to take part in the training of the Turkish army.[2] This move, which meant breaking away from democracies and entering autocracy, was followed by verbal assault and defacto attacks against NATO member states.

After the invasion of Ukraine, both the support to the Russian invasion in the Turkish media and the absence of any protest against the invasion show that Turkey is surrounded by Putin. Ethem Sancak, one of Turkey’s oligarchs, known for his love for Erdogan, visited Russia and compared NATO to “a cancer tumor from the past” on Russian television.[3]

Yes, Erdogan’s Turkey, which has set Putin’s Russia as an example, is now governed by an authoritarian regime. For this reason, authoritarian Erdogan has developed further relations with Putin, who is also an authoritarian leader rather than a democratic one.

Turkey after the invasion of Ukraine

Speaking to DW, Ukrainian Ambassador to Ankara Vasyl Bodnar said that they defended all of Europe, including Turkey, against a possible Russian threat.[4] Those who know Russian history will agree with Bodnar. Aware of this situation, the European Countries were quick to react to Russia. So much so that the countries that saw themselves under the threat of Russia started to take either NATO or EU membership on their agenda. Well, isn’t Turkey, who has currently preferred a passive policy against the matter, under Russian threat?

The Testament of Peter the Great: In summary, it mentions first invading the Crimea and reaching the Black Sea, arranging rebellions among the Balkan nations and removing the Ottomans from these territories and finally descending to the Mediterranean by dominating the Istanbul Bosphorus and Dardanelles.

This goal is a significant milestone on the way to making Great Russia. This red apple (Kızıl Elma), which was tried to be realized during the Tsarist period, was actively followed during the USSR period. Russia, which replaced the USSR with Putin, reincarnated the will of Petro.

From a strategic point of view, we can say that the security of Istanbul was endangered by the occupation of Crimea in 2014. So much so that during the reign of Catherine II, they had placed an inscription on the entrance gate of the town of Kherson on the banks of the Dnieper River and on the border of Crimea, on which “Istanbul can be entered through this gate” was written. Yes, the Russians saw Crimea as their first destination to reach Istanbul. No one can say that the Russians have given up on this goal.

With Putin’s invasion of Ukraine, the city of Kherson was captured by the Russians. However, we did not hear any serious reaction from the Turks. Turkey should have reacted to the invasion of Ukraine at least as much as Finland or Sweden. Meral Akşener, the leader of the Iyi Party, who is also a historian, pointed to the approaching Russian danger and stated that a reaction should be taken.

By remaining neutral, Erdogan facilitated the Russian invasion of Ukraine. If Erdogan had participated in the embargoes imposed on Russia like democratic countries and stated that he would open the Istanbul Bosphorus and Dardanelles to the NATO countries, Putin would not have acted recklessly.

Calculating this situation, Putin made Turkey immobile before the invasion of Ukraine by besieging it through Erdogan. Turkish opposition leaders also make the determination that Erdogan was besieged and taken hostage.

The Russian threat may cause Turkey to return to democracy, just as it has repeated many times throughout history. And it should. However, it is understood that this turnback is not possible under Erdoğan’s rule. Again, as history has put forth, such transformations were only possible in Turkey after shifts in power. The transformation that Turkey needs will first be possible with a shift of power. However, Putin will try to prevent this shift from happening in Turkey.