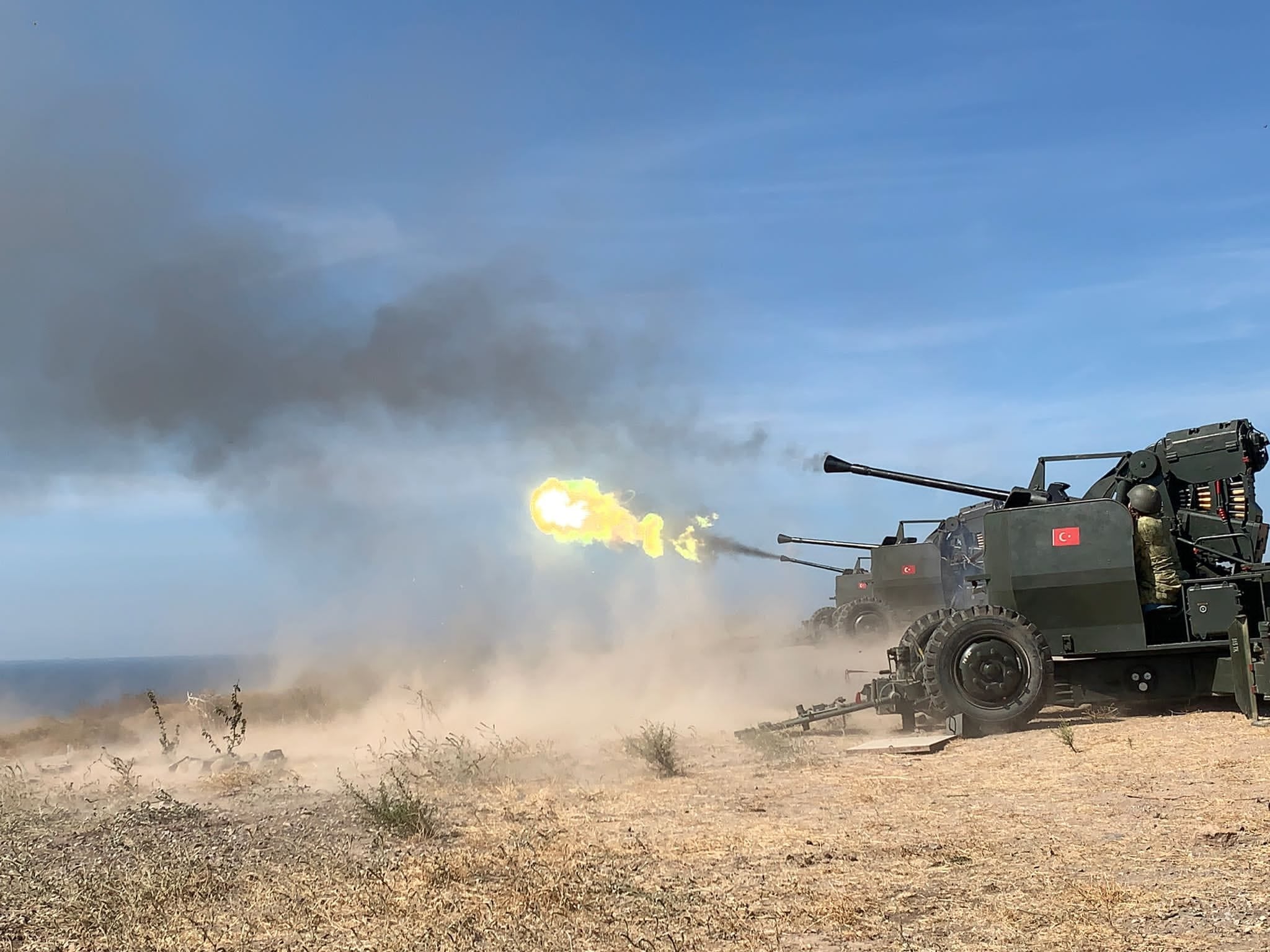 Beyond the Halo Effect: Can Turkey Defend Itself in a Conventional War?

There is a growing tendency among the international commentariat to make optimistic assessments about Turkey’s military capabilities by highlighting its emerging national defense industry, most notably armed drone technology, and its military presence in several theatres from Libya to Syria. Coupling with Turkey’s mediating diplomatic role in the Russian invasion of Ukraine, these two determinants seem to create a “halo effect” or “myth” that prevents the experts to grasp the real posture of the Turkish Armed Forces.

In this short piece, I will argue that despite a misleading optimism, the Turkish Armed Forces (TAF) is far from being self-sufficient and is heavily reliant on NATO and Western military capabilities and support to fight a highly unlikely but practically not impossible conventional war against its historical foes.

While Turkish-Russian relations are complex, with both competition and cooperation taking place across multiple theatres and aspects, one should take note of centuries of diplomatic and military antagonism looming in the backstory.

In February 2020, for a recent instance, the Russian Air Force together with the Syrian Air Force conducted airstrikes against a Turkish Army convoy in Idlib, Syria. According to President Erdoğan, the strikes resulted in the deaths of 34 Turkish soldiers, while other sources gave death tolls of up to 100 Turkish soldiers killed, making it the single deadliest attack on Turkish forces in recent history.

In another example, a Turkish F-16 fighter jet shot down a Russian Su-24M aircraft near the Syria–Turkey border in November 2015.

Many may have already forgotten but in 1945 the Soviet Union attempted to reclaim Kars and adjacent Ardahan, which were Turkish cities ruled over by the Russian Empire for 43 years from 1878 to 1921. Following the Russo-Turkish War of 1877-78, the Treaty of San Stefano transferred these cities to Russia, and Kars was designated as the capital of the Kars Oblast (province), which included the districts of Kars, Ardahan, Kaghisman, and Oltu and was the most south-westerly extension of the Russian Trans Caucasus.

When, in 1945, Molotov informed the Turkish authorities that the regions should be returned to the Soviet Union, Turkey found itself in a terrible situation. By the autumn of 1945, Soviet troops in the Caucasus were ordered to prepare for an invasion of Turkey. Turkey, not capable of fighting a war with the Soviet Union, sought support from the West. Prime Minister Churchill objected to these territorial claims, and the United States began to see Turkey as an ally against Soviet expansion and decided to support it financially and militarily. By 1948, the Soviet Union abandoned its claims.

However, the Turks never forgot this traumatic experience and this very trauma was one of the prominent reasons for Turkey to take the decision to become a NATO member in 1952. Turkey saw NATO membership both as a security guarantee and a way of reinforcing its Western identity. Since then, the TAF served as the defender of the southeastern flank of the Alliance. NATO membership for the past 70 years has greatly benefited Turkey. NATO’s culture, benchmarks, and technology had a major impact on its military. Turkey has so far paid back the alliance as a staunch member, contributing to NATO missions, and currently hosting NATO’s Land Command in Izmir.

I agree with Joshua Rovner who mentions Putin as an “inept strategist” in his recent article. As Rovner puts it “Political and military leaders often worry about brilliant rivals, but the problem today is different. Instead of the danger of being outwitted, the danger is the fallout from Putin’s mistakes.”

May this inept strategist, one day, make a mistake and reclaim or threaten to reclaim the “annexation” of Kars and Ardahan? If he does, what happens? Can Turkish military forces defend its motherland without the support of NATO and the Western allies?

Some may argue that this hypothetical war is never going to happen due to the fact that the very existence of NATO is all of the deterrent necessary to keep Russia from attempting an attack like this.

However, this unlikeliness is not an absolute guarantee for a fait accompli by Mr. Inept Strategist.

Below, I will attempt to delineate the vulnerabilities which could undermine Turkey’s military apparatus in such a virtual war.

Maintenance: The TAF will face significant challenges in terms of development and maintenance. For example, after being removed from the F-35 joint strike fighter program, its air force is struggling with an aging fleet of aircrafts that are nearing the end of their useful life. Industry experts suggest that it will be a long time before Ankara is able to field a series of indigenously produced fighters that can replace them. As a result, Turkey will have to continue to rely on the US and European suppliers to retrofit and maintain its current F-16’s.

The predicament of Turkey’s air force underlines the country’s broader military situation. Despite the growth of its defense industry, Ankara remains reliant on its traditional allies in Europe and North America to advance domestic military development. This reliance extends beyond the maintenance and modernization of military hardware.

Personnel Vacancies and Abuse of Forces: Another challenge is about overuse of its land and special forces. Culminating in the last 5 years, the Erdogan government’s political ambitions overstretched the Turkish military beyond its real capabilities. Following the harsh treatment after July 15, 2016’s botched coup attempt, Erdogan gained an upper hand over the military and browbeat the top brass, including Defense Minister Mr. Hulusi Akar, so much that they became unlikely to offer him their unvarnished military advices. Nor are they in a position to challenge President Erdogan’s polito-military cross-border appetite.

Consequently, the Turkish military, most notably the land and special forces, has come to the edges of its limits and maybe is currently beyond it. It has been investing the best of its land and air units (personnel, vehicles, and weapons) to keep controlling Northern Cyprus, large swaths of northern Syria, northern Iraq, Libya and Azerbaijan, leaving the domestic units in shambles. Force power needed for supporting the units deployed for cross-border operations was extracted from domestic units. As a result, experts estimate that domestic land force units are only about half manned. In most of those domestic military units, lieutenants are reportedly company commanders and army captains are battalion commanders.

Friction between Eurasianists and Religious/Pro-Erdogan Factions: Despite its pretentious territorial presence abroad, the Turkish military is lacking specialized and sufficient command, control, intelligence assets and logistic support needed to conduct modern combat operations and is facing morale and discipline issues.

With the mass purges beginning immediately after the coup attempt in 2016, nearly 50 percent of the land force generals, 45 percent of air force generals, 60 percent of naval admirals, and around 75 percent of the staff officers in charge of concept development and planning in strategic and operative headquarters have been discharged, causing a sharp loss in human capital. The depletion of personnel has been adversely affecting the combat strength of the TAF. Reliance on Eurasianist and ultra-nationalist cadres as well as religious sects to restore these vacancies has caused an endogenous shock within the military and has increasingly transformed its monolithic identity into a polylithic one (composed of many but separated micro-identities).

For example, DW (Turkish) reported that the TAF dismissed 56 soldiers stationed in Libya in December 2021 after the troops filed a complaint against their commander on charges of bullying. The TAF terminated the specialist sergeants’ contracts after investigating the soldiers’ complaints to the Presidency Communication Centre (CIMER). According to the soldiers’ claims, they were forced to train despite illness and were subject to verbal abuse, including being told “they were nothing and did not deserve their salaries.” The sergeants accused their commander of physical and psychological bullying, with the complaint including details of the group allegedly being forced to collect the trash of their Libyan counterparts. The Armed Forces Command accused the soldiers of a “coordinated and planned effort to disturb discipline in the unit,’’ as well as displaying attitudes that are aimed at intimidating their force commander.

What makes this story relevant to our subject is that, according to the rumors, the sergeants and their commander are affiliated with different cliques within the military.

As Prof. Hamit Bozarslan suggests “Yes, Turkey has not been specifically targeted by Russia in the context of the Ukraine war, but Putin has trapped Turkey by means of the war. The message (delivered by Russia to Turkey) is: ‘You cannot separate from me; you cannot get closer to Europe or the United States. You are under my domination.”

As Russia and the West enter a new period of confrontation, some Western commentators have suggested a possible bright side: the return of Turkey as a NATO member in good standing. I agree with this suggestion in that Turkey will soon recognize its military’s limits vis-a-vis Russia and will comprehend that it needs NATO to free itself from Putin’s trap.

Previous articleCivil-Military Relations Before and After the 15 July Coup Attempt in Turkey: Two Dimensions
Next articleTurkey as an Equation with many Unknowns