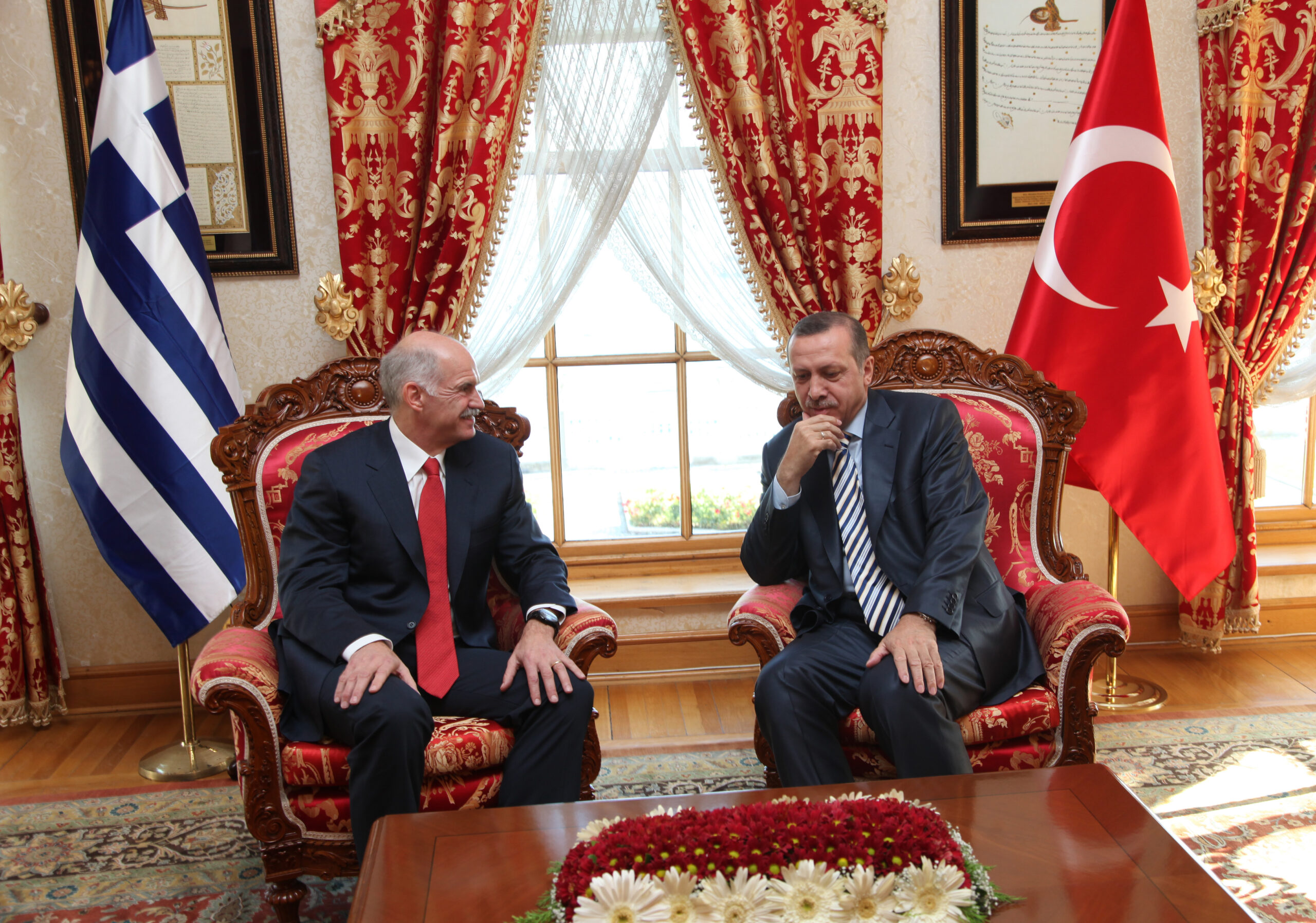 Are Greek-Turkish relations a unique case?

On February 2nd, the landing of an Armenian passenger airplane at Istanbul airport a few days ago, was reported by Turkish media as a “historical” move signaling an improvement of Turkish-Armenian relations. The flights between these two countries had been cut for two years and this move was viewed as a cautious effort to warm frozen ties.

Lately, Turkey has been making an attempt to improve its relations with other countries, too. On December 22, 2021, President Erdoğan declared that “good Turkey-Israel relations are vital for the stability in the region” and on January 19, the Turkish side stated that the mutual visits of the leaders from these two countries are imminent, but the dates are still to be decided.

On September 7 and 8, 2021, the second round of Turkish-Egypt exploratory talks took place in Ankara and the two parties expressed their wish to normalize their relations which have been tense in the last years.

On November 29, 2021, Erdoğan, while talking to journalists about the United Arab Emirates, stated that in the past, there were some unfortunate events but now the bilateral talks are positive and that he plans to visit the Emirates within the upcoming February. A visit to Saudi Arabia is also planned with an apparent wish to improve the bilateral relations that have been seriously impaired recently.

Lately, Erdoğan has been trying to improve Turkey’s relations with France. He met with Macron even though in October 2021, he had said that Macron “needed a mental health treatment.”  Following the statement, France had recalled its ambassador to Turkey.

On February 1, the Turkish journalist Barış Terkoğlu of Halk TV criticized the expected visit to Turkey of Khalifa Haftar, the leader of East Libya and the commander of the Tobruk-based Libyan National Army. Haftar was considered an “enemy” and responsible for the death of Turks in Libya until recently. The bilateral relations with the EU countries and the USA, even though periodically have been tiring, are rather “ordinary” and they seem sustainable.

It is as if only Greece and Cyprus are not in the Turkish list of countries with which re-approchement is sought. Greek-Turkish relations are notorious for being tense and volatile for decades. Why do these inter-ethnic relations pose as unique?

A predictable response to this question would be the blame game by both parties. Each can argue that they are open to a dialogue that will lead to agreements based on concessions and that their goodwill is proved by their conciliatory approach vis-à-vis the third parties. Turkey, however, may sound less persuasive since, in recent years, it has been involved in strenuous initiatives in various geographic areas and its leader was often involved in heated verbal contentions with his adversaries.

Another explanation of the frozen conflict between Greece and Turkey may be the pending problems related to some disputes about the borders between the two countries in the Aegean (continental shelf, air space, etc.), the mutual claims on Exclusive Economic Zones and the unresolved Cyprus issue. But a question still needs to be answered: Are these problems the reason of the tense relations or do the tense relations hamper the reconciliation?

The case of the Greek-Turkish relations is both a “classical” one, in the sense that similar disagreements are common in international relations but special in some respect, too. This article is mostly about Turkey and primarily about the “special” dimension of the relations.

Four main domains render the relations special: 1- History and its role in forming identities; 2- The education that recreates some stereotypical convictions; 3- Nationalistic perceptions characterized by mistrust and phobias; 4- The conjecture in present Turkey.

The Greeks and the Turks compose a unique couple where each side fought against the other in order to liberate themselves and create their own national state. In 1821-1830, Greeks fought against the Ottomans (called “Turks” in Greece) and one hundred years later, in 1919-1922, the Turks, in order to establish the modern Turkish national state, fought against the Greeks who had occupied west Anatolia. The creation of these two nation-states was the end result of an ideological process that lasted various decades preceding the “War of Liberation,” but the war itself bears a symbolic meaning.

The construction of the new national narrative was based on these wars. The pride of the nation (national heroism, etc.) and the national sacrifices that lead to the new state (and legitimizing it) are related to these historical moments. These events are celebrated annually as the most important events of national existence.

The “other” in this case is reminded but only as a negative actor. It could not be otherwise since a liberation war against a non-negative enemy would be an oxymoron and would jeopardize the whole national enterprise. The “other” has to be negative and has to be the reason of “our” historical suffering, deprivation, and grievances, in short, of situations that legitimize “our” evolution, sacrifices, and the establishing of the new “free home country.”

At this point, the second domain of education finds its place in the equation. Schools are only a small part of education: The literary texts, the political speeches, the films, the museums, the press, and the TV news recreate the national narrative. Gradually some convictions turn to self-understood realities. The basis of this discourse is the nationalist understanding that nations compose a continuum whose “national characteristics” reappear throughout history: “We” were, presently are and will be in the future, on a  positive note; the “other” was, is and will be negative.

This carries us to the third domain; to the nationalistic perception characterized by mistrust and phobias. An example that refers to a textbook of 1989 and to a sentence of a few days ago shows how almost racist perceptions of the “other” are expressed as common-sense utterances. The textbook which was prepared for about ten years old students reads: With what they did in 1821 “the Greeks showed by their actions that they are capable of killing without mercy even the babies in their cradle.”[1]

A similar perception of the Greeks was voiced by the Turkish President recently, on February 2, 2022. With reference to the killed refugees near the Greek-Turkish borders and stating that this was an act of the Greeks, he said: “But we are not facing this strange behavior of Greece for the first time. The killing of so many refugees by sinking their boats is very important in showing what this usual behavior is. Unfortunately, there is a structure which almost shows what Greek culture (civilization) is.”[2]

The above utterance also shows the fourth domain, which is the political conjuncture. Erdoğan, on the one hand, believes in what he has learned during his schooling and on the other, like most politicians, he does not want to challenge the socially established national stereotypes.   It is as if a negative “other” is instrumental in daily politics, too, and the Greeks are a suitable choice as the “other” since there is already a prosperous ground in this domain.

Theoretically, things could have been better had a modern understanding of the nation and nationalism been chosen: Seeing the nation as a constantly changing body, i.e., without a good or bad “character”, a world that is not composed of superior and inferior nations, and a past that does not necessarily have to be repeated.  Of course, this has to be socially internalized through “education”, that is, by appropriating a new national narrative. This is a complex enterprise.

The Greek-Turkish relations are somewhat more complex than the schemata presented above. For example, two important domains were not covered in this article: The counter role of Greece (perceived as a “historical heir” of some lands in the region); and the “West” (perceived as a “historical rival and the supporter of Greece”). However, these “perceptions” are the end result of the ideological domains mentioned above. The omission is only due to the space available. It should also be reminded that, naturally, there are many in Turkey who do not abide by the nationalist prejudices mentioned above.

Previous articleThe Current Situation and Future Expectations of The Turkish Air Force
Next articleHope for Turkish Diplomatic Success in Ukraine?